How far will you go when all your businesses fail?  Will you be crushed in defeat? Or will you resurrect like a phoenix bird? If so, how would you do it?

The year was 1992. Richard Branson tasted the bitter side of life when he found it very difficult to stay financially afloat. His dreams and hopes were pulled down like an air castle.

He decided to sell Virgin Records, his company  to Thorn EMI. When he signed the agreement to close the deal, Richard’s eyes welled up.

But he had no plans to quit!  Because he was an entrepreneur by passion!

Richard Branson was born on  July 18, 1950 in Surrey, England. His father, Edward Branson was a barrister and mother, Eve Branson, a flight attendant.

As a child Richard was not good at studies as he had dyslexia, a learning disability. Initially, his mother could not figure out what his problem was. He couldn’t read or write.

However, Eve wasn’t ready to give up. She sat with Richard and taught him to read letters and make out the meaning from texts. Gradually she brought him back to life.

He failed in schools over and over.  Later, he joined Stowe School, Buckinghamshir, but dropped out soon. It was a turning point in his life.

On his last day at school, Robert Drayson, his headmaster, said he would either end up in prison or become a millionaire!

He took the first step to entrepreneurship when he was just sixteen.He landed on an idea of starting a magazine. He contacted the contributors and advertisers before publishing the magazine and collaborated with them.

In 1966, Richard launched his magazine titled Student. It  was a tremendous  success as Branson managed to sell ads worth $8000 in the first edition.

The magazine grabbed attention for its varied and rebellious views on a mosaic of topics like politics, pop culture, music etc.

“We want STUDENT to develop as a platform for all shades of opinion, all beliefs, and ideas,” Richard wrote in its editorial.

His parents supported his every entrepreneurial attempt as they thought it was his passion. He proved them right.

Student became a sensation among as students. It carried interviews of public figures, opinion pieces and reviews.

So Richard Branson found it necessary to provide financial backing for the magazine.

He wanted to generate additional revenue to run STUDENT smoothly.   But nothing worked out.

He had great plans to popularize the magazine. Eventually STUDENT magazine was shut down.

After STUDENT, Richard Branson was sure about his passion – entrepreneurship.

He always had the conviction that he created something valuable. The experience of his first venture changed his perspective towards business.

Student magazine helped him understand the tactics and trends of business.

He was desperately seeking new business ideas. He looked for many options.

He wanted to know what people loved the most.

Finally, he found that one element that held everyone together – music!

The passion for music among youngsters was so deep that they even mortgaged all their belongings to get a new Bob Dylan record!

So Richard decided to create something around the music industry.

That’s how his next venture, Virgin Records, was born!

He named it ‘Virgin’ since he thought he is a complete virgin at business.

Richard Branson started Virgin Records in 1972. It was a milestone in his entrepreneurial life.

For the first time, he was doing a real big business. Within a year, Branson got their first artist.

Renowned English musician Mike Oldfield recorded his debut album Tubular Bells in 1973 with the help of Branson’s team. The song was an instant hit and it stayed on the UK charts for 247 weeks!

This gave a great entry for Virgin Records in the industry. Richard signed other artists followed by the humongous  success of Tubular Bells!

Many eminent artists like Sex Pistols,Culture Club, the Rolling Stones and Genesis collaborated with Virgin Records, making it one of the top record companies in the world. 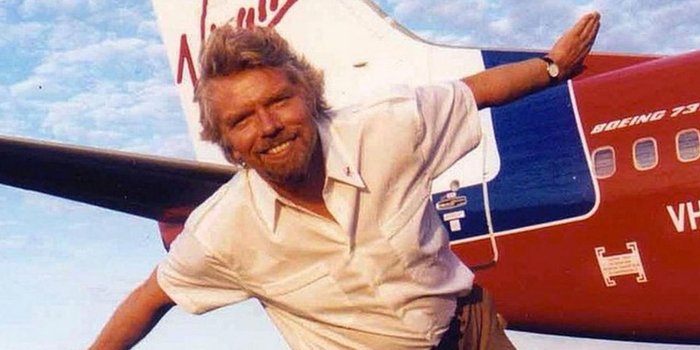 The success of Virgin Records persuaded Richard to diversify the business to other areas.

He founded Voyager Group travel company in 1980, followed by Virgin Atlantic airline in 1984.

By this time Richard Branson was already financially sounding and he focused on expanding his business globally.

However, he faced unexpected roadblocks in business in 1992. It was indeed a tough time for Virgin. His business struggled deeply.

Branson was burning candles at both ends to raise funds for his companies, but nothing turned in his favour.

His brainchild, Virgin Records, was about to face a slow death when it couldn’t handle the financial crisis. Things were out of control.

As an entrepreneur, Richard faced the worst nightmare- To sell off his whole business.

There were no alternatives. So Richard Branson sold his businesses to Thorn EMI in 1992.

He reportedly cried when he signed the agreement and closed the deal. Everyone thought Richard Branson would be gone.

But, he wasn’t ready to blame his fate and retire.

He got a decent amount from the deal, which he used to set up his next business. That point marks the beginning of Virgin’s second phase.

Richard Branson made reentry into business by launching Virgin Radio in 1993. He had learnt from his mistakes. So this business was set up with more prudence.

He understood patience was the key to build business. Instead of hustling, Branson waited for the best time and entered again into music industry with V2, his second record company, in 1996.

He signed some eminent artists such as Powderfinger and Tom Jones. It was the beginning of Virgin’s tremendous growth as a business entity.

Within years, Richard Branson transformed Virgin into a conglomerate with operations across 34 countries including the United Kingdom, the United States, Australia, Canada, Asia, Europe, South Africa etc. He had about 70,000 employees working under him across the globe.

Richard Branson was knighted in in 1999 for his contribution to entrepreneurship.

Richard was always fascinated by the idea of space tourism. So he co-founded Virgin Galactic, a spaceflight company within the Virgin Group, in 2004.

It’s ultimate objective is to make space tourism possible in near future. The company also specializes in providing suborbital launches for space missions.

Richard Branson holds many crazy guinness world records! In 1987, he set the record for the first hot air balloon to cross the Atlantic,

Four years later in 1991, Richard was aboard the first balloon to cross the Pacific from Japan to Arctic Canada. He’s also the most followed profile on Linkedin!

He recently found that he had 3.9% Indian DNA!  Now with a net worth of $5 billion, he wants to build ‘Virgin Territory’, his vision!

Richard Branson is married to Joan Templeman and the couple have two children, Holly and Sam.

Branson is known as Old Beardie among his friends!

He is also an influential writer and philanthropist.  He has authored many books about his experience in life.

Richard Branson is also part of anti- nuclear weapon campaign, Global Zero and many other NGOs working for different causes

Here are some fabulous words of Richard Branson. Get inspired now!

In his entrepreneurial journey, Richard Branson wasn’t perfect at every stage. He just plunged  into new domains when his inner voice told him. He failed bitterly and lost almost everything.

But he never quit. Instead he reinforced his mindset and embarked on a journey to build his business again.

Things may fall apart once, twice or even more. But never think of quitting as an option. Because entrepreneurship demands your blood and sweat! 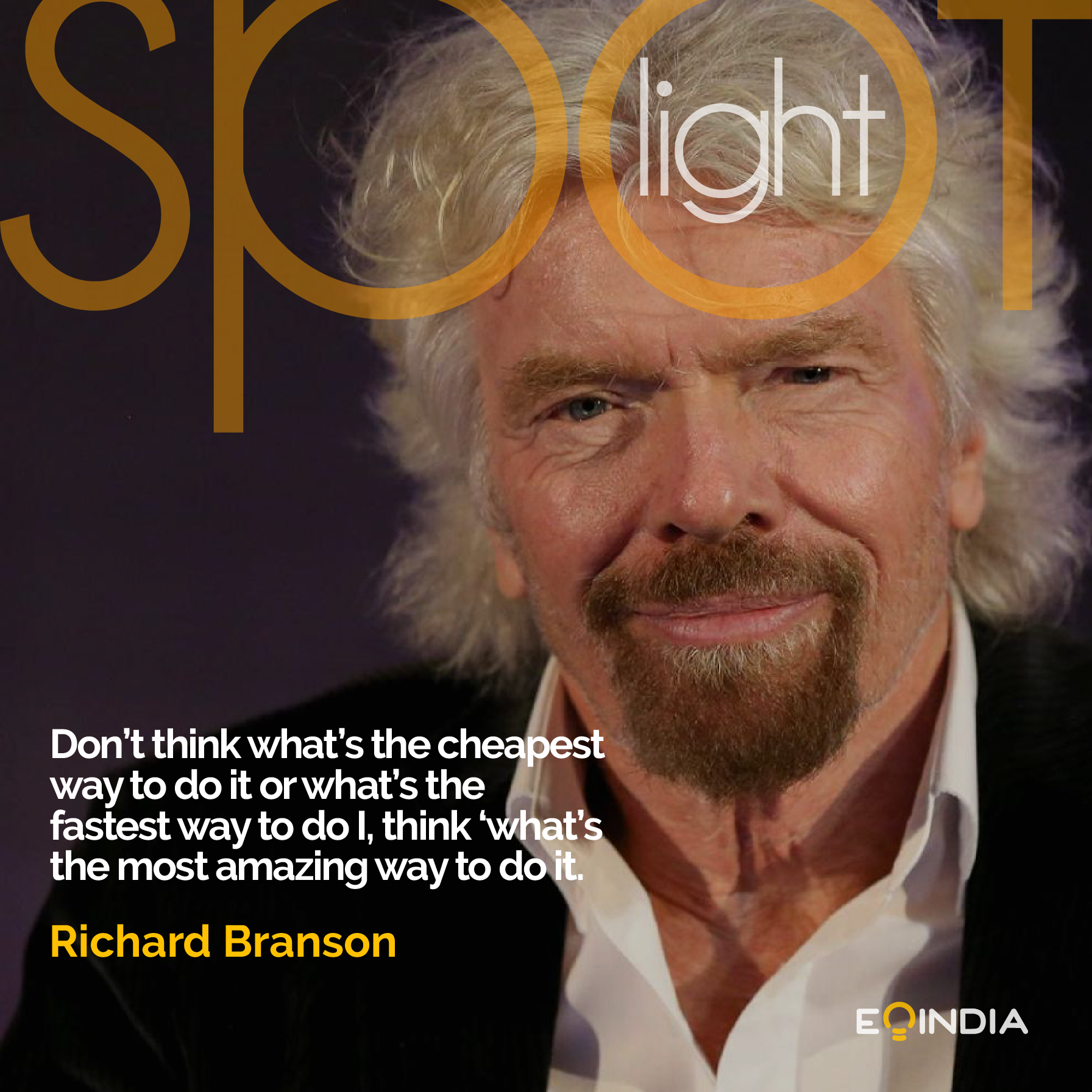 Who’s your favourite entrepreneur? Let us know in the comments below!

How Startups Roll up their Sleeves to Help Kerala Flood Victims

How This Youngster Helps Local Vendors Grow Their Business