Years ago, Ritesh Agarwal, a teenage boy from Odisha had a bumpy ride travelling across India with a backpack. He had no money to book a room in top hotels. So he knocked the doors of cheaper places to stay.

As expected, the rooms that suited his pocket were shabby and provided poor amenities. He returned home after days of travelling and ideated his business.

“What if I could start a business that provides quality rooms at reasonable price?”. He thought.

That’s how Ritesh unlocked a huge opportunity in standardizing budget hotels in India and embarked on a journey to start his own business!

Into Entrepreneurship at a Younger Age

Ritesh was born in 1993 in Bissam Cuttack, Odisha. Entrepreneurship was his passion from childhood. He always wanted to do something of his own rather than working under someone.

What do you do when you are an aspiring entrepreneur? Will you wait for the right time? At least you might wait until the college is over. That’s how many entrepreneurs did. You believe it’s the ideal way to launch your business.

So the equation might be something like this- study, find a job, make money and start a business.

But Ritesh has a different story to tell. His parents sent him to Kota in Rajasthan, a place famous for entrance coaching centres in India. They wanted to make him a good engineer with a degree from the prestigious Indian Institute of Technology.

However, Ritesh, despite being brilliant in studies found the life in Kota very tedious. He realized it wasn’t his passion. So he dropped the entrance coaching plan and decided to follow his dream – to become an entrepreneur.

Ritesh attended entrepreneurial events in Delhi to understand more about startups and entrepreneurship. He often sneaked in as he couldn’t afford the registration fee of the events!

Ritesh quit studies right away when he decided to become an entrepreneur. He waited for none. Instead he just plunged into entrepreneurship at 19, when his peers were still attending exams!

But Ritesh had exceptional skills in programming. It was his hobby. He even invested time in learning programming from his elder brother’s textbooks.

Ritesh Agarwal used to sell sim cards when he was just 13 as a means meet his personal expenses. Who else would do it apart from an ambitious entrepreneur? However, things weren’t easy for him. He wanted to prove his point right.

After school, Ritesh enrolled for the University of London International Programme provided by the Indian School of Business and Finance.

He realized going to college opens doors for learning in a structured fashion and it wasn’t his cup of tea. That’s how he dropped out of the college to pursue his entrepreneurial dreams.

Having an idea alone is not enough to start your business. Every business needs investment. Ritesh too ecouncuntered this problem.

“How to get  funding for the business?”. He thought.

That’s when he heard of Thiel Fellowship, instituted by PayPal founder, Peter Thiel for young aspiring entrepreneurs. He realized it was his only chance to set up the business he had ideated for years.

Ritesh got Thiel Fellowship, which pumped in a grant of $100,000 to realize his business dreams.

He founded Oravel Stays in 2012,a website designed to enable listing and booking of budget accommodation. Later he changed its name into OYO Rooms (on your own) in 2013.

He partnered with cheap hotels and transformed their rooms according to OYO standards. You might be wondering what does OYO mean by standardized rooms?

It provides clean rooms with air conditioners, television, WiFi, branded toiletries and complimentary breakfast. That too just for ₹999 or even lower! Ritesh partnered with many hotels across main Indian cities and brought them on Oyo’s platform.

Click here to read our exclusive review on Oyo Rooms !

In 2015, he held discussions with ace investors like Lightspeed Venture Partners and Sequoia Capital  in order expand the business. It worked. He raised $24 million for Oyo from these investors through a Series A funding round.

Later that year, Ritesh planned to expand the service of Oyo to more Indian cities by bringing in more partner hotels. At this stage, he got another big names to pump in cash. Japanese giant SoftBank invested $100 million in Oyo, which helped the company attain a pan-Indian presence.

The humongous success of Oyo Rooms encouraged Ritesh to expand his business beyond national boundaries. He launched Oyo Rooms in Malaysia in 2016. The move came shortly after the SoftBank’s investment in 2015.

“Malaysia is our first port-of-call given the attractive characteristics of the market such as higher-than-average mobile penetration and a large internet population. Unbranded hotel room supply accounts for a majority share of hotel supply worldwide,” Ritesh said at the Malaysian launch.

In the following year, he launched Oyo Rooms in Nepal as well. Oyo has now become the most trusted brand for budget travelers to get a safe stay at every major Indian city. Ritesh made Oyo India’s largest branded network of budget hotels.

As a result, Ritesh transformed Oyo into a business worth ₹25,000 crore and he is in pursuit of scaling great heights as Oyo is planning to expand to more countries.

As an entrepreneur, Ritesh experiments with different strategies to guarantee a seamless experience for his customers. He introduced Oyo Flagship hotels that are directly owned and maintained by Oyo. These hotels provide premium amenities for customers.

Ritesh wrote the book as an information guide to engineering students who sought admission in India’s top colleges.

Want to know the secret of Ritesh’s success? Here’s what he says about entrepreneurship:

Time is a crucial factor in any business. Ritesh came up with an idea at the right time. He drew inspiration from his experience. So If you think your product or idea can address a problem effectively, start right away. Learn through experience as Ritesh did. Because your experience defines your strength in entrepreneurship. 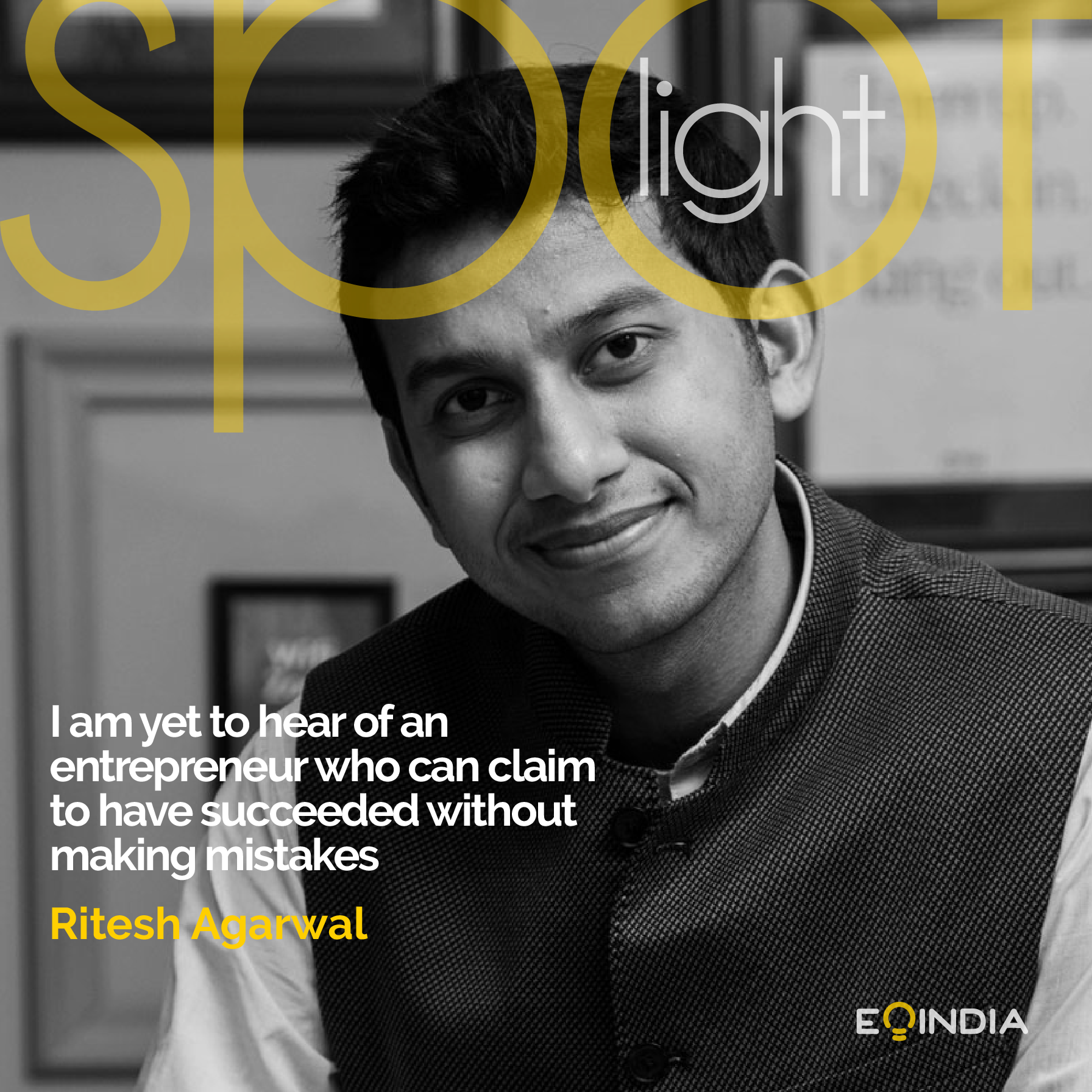 Who is your role model in entrepreneurship? Share in the comments below!