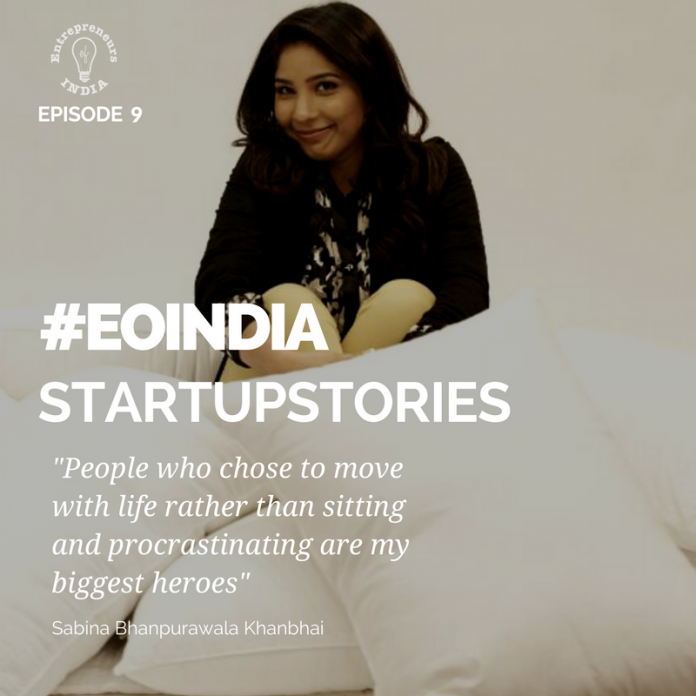 Sabine describes herself as a daddy’s girl who loves reading and spending time at her farm to relax. She is an advocate for encouraging enterprise among the 70% of Indian businesses that are family owned and run. She also loves partnering with organisations to genuinely make a difference, profit, non-profit, doesn’t matter.

Hi Sabina, welcome to #eoindia, we are excited to tell your story, so let’s dive right into the questions…

1) How did you get your idea for this business?

So for me, it’s more about how I got the idea of joining my father’s business as opposed to working in a different company. I always had an enterprising spirit within me and so the thought was why can’t I make a difference in my family business rather than starting something of my own or working for someone else? After all business is a business – a platform to make a difference. I knew the business had tremendous potential, and if not me, there was no torch bearer. I wasn’t going to let the family legacy end. So, here I was ready to join them.

2) What was stopping you from becoming an entrepreneur?

I think it’s not just me, but entrepreneurs in general. The ONE thing that stops them is DOUBT. Doubt in yourself, whether you’ll be able to do it or not, whether you’ll do it correctly or not, what if I fail? Like most others, that was what made me hold back. In fact for me, the biggest doubt was, what if I ruin a 40 year old business, do I have what it takes or not? Well, I figured the only way I’d know, is by doing it. The worse thing that could happen was I’d fail, which was a MAYBE but if I didn’t try the failure was SURE. The business would end, I would never know what I was capable of. So I decided I would go on and find out!

3) What was the reaction from your family when you first decided to start your business?

Again for me, it was their reaction to my decision to join the family business. They were surprised. Didn’t expected it. Because as a kid, under 10 I was more of a creative person, I used to play the piano, do all sorts of craft, calligraphy and was a pretty average student at school. So they were very surprised that someone with a personality like mine could be interested in running a company. But soon, they were so happy, happy at this unexpected development and happy that I made the decision early in life. So that left us both enough time to work as a team, I had enough time to make mistakes and learn from them, because I had them by my side and still do. It became a merger of 2 generations rather than an acquisition which is what typically happens when next gen plans to join in at the age of 30 maybe?

4) What was your biggest failure in business and what did you learn from it?

Thankfully none big enough to make a memory. But I know I may fail today and will again and again. But my biggest failure will be the day I fall and do not get up.
Moreover, failure is a sign that you’re trying something different, something not safe and something you don’t know too well. Which means you’ve dared, stepped out of your comfort zone and learned something new. So the one thing I’ve learned through failure is, you gotta get back up!

5) When did you realise that your business was going to be successful?

Fortunately for me, I entered a business that was already so beautiful and reputable. But I knew I was going to be able to keep it up high because I agreed to its core values. Our entire business has been woven around honesty, great service and quality products.

6) What habits contribute to your success?

I strongly believe in doing things only If I can give it my 100%. So whenever I take up any project/job it has my 100% attention. Once the attention is there the dedication simply follows. Hard work is another very very important aspect, as cliched as it sounds, it holds a lot under its umbrella. Hard work means sacrificing, it means no sick breaks, it means going on even when you are doubting. It means there’s no packing your bags and saying I QUIT!

7) If you had to start your business again what would you do differently?

I would definitely add more team members. One of the problems of a family business is that we rely only on resources within the family and not on external available talent. This creates obstacles during expansion and moving forward. Because by the time we reach that phase in the business there’s lesser risk appetite on the sides of the prev generation and loss of patience in the new one. This is a big issue in family businesses and I wish I could’ve changed that.

8) What is your favourite inspirational quote?

“Throughout the centuries there were men who took the first steps down new roads armed with nothing but their own vision”. – Ayn Rand.

9) Where do you find inspiration?

In everyday people I meet. Each one is fighting a battle and everyone still shows up and does whatever is in their stride to move. We are all bound by the fact that LIFE GOES ON. And people who chose to move with life rather than sitting and procrastinating are my biggest heroes.

10) What is your favourite book?

11) What advice would you give to someone starting out?

Do whatever it is, only if it has your heart in it. Else you won’t be able to go far and giving up will be easier. However, having your heart in the right place is just the beginning. No goal is good enough if you can’t move toward making it a reality. Be ready for crazy hardwork and dedication which, more than fighting anything outside, involves challenging your own limits.

Thats it. As usual a massive thank you to Mini for taking the time to answer those questions.

Sabina’s Book of the Week

EOIndia Book of the Week

Story of a Bootstrapped, Offbeat & Awesome Startup That Makes Affordable Design a Reality