Years ago, when a young boy from US laid his fingers on computer, nobody would have thought that he would change the world and bring a revolution in IT. He grew and ignited the whole world with his powerful innovations.

We know him as one of the richest and perhaps the most influential entrepreneur in the world. A guiding spirit to many young aspiring entrepreneurs. Now, a ray of hope for many in the darkness too!

Yes, Bill Gates! The name speaks everything. You know who and what he is. The legendary entrepreneur who gave us Microsoft. His life is not just a story of astounding success. It also depicts the relentless passion of a person who envisioned to change the world.

Who was Bill Gates Before Microsoft ?

Bill Gates was born on October 28, 1955 in Seattle, Washington. His father, William Gates Sr, was a lawyer and mother, Mary Maxwell, a businesswoman.

His parents wanted him to be a lawyer. But Gates developed an interest towards computers and programming.

He learnt programming in BASIC when he was just thirteen. He wrote the first computer program on a General Electronics’ computer that he got when he was at Lakeside School.

Gates’ passion towards programming grew stronger as he advanced in studies. He helped find the bugs in the PDP-10 computer at his school. He was a National Merit Scholar when he graduated in 1973 from Lakeside School.

Bill Gates enrolled in the prestigious Harvard University in 1973 by scoring 1590 out of 1600 in the Scholastic Aptitude Tests. He took his passion to Harvard too. At Harvard, Gates learnt computer science.

He didn’t have a proper study plan.He just spent his time learning different aspects of programming.

Despite his rich family background, Gates wanted to build something of his own and he knew it would only be possible through his passion, computer and programming.

He met Steve Ballmer from Harvard, who would later become the CEO of Microsoft. Gates joined Honeywell in 1974 for training. It was from there he came cross MITS Altair 8800, a microcomputer launched in the same year. He thought it was the best time to launch his business.

Bill Gates dropped out of Harvard to launch his software business. His parents were supportive of his idea as they were convinced about Gates’ ability.

Bill Gates launched Microsoft on April, 1975 along with his school friend, Paul Allen. It marked their entry into software business, which was booming in the US. The idea was to create cheaper and effective personal computers.

Gates made his moves carefully. Since they were beginners, Microsoft needed a reliable partner on its side to flourish in the business. He partnered with IBM  in 1980. This partnership was crucial in propelling Microsoft into one of the most leading software companies in the world.

Gates and Allen created an operating system for IBM in 1981 and branded it as MS- DOS (Microsoft Disk Operating System). IBM rebranded it as IBM PC DOS. By this time, Bill Gates had laid out plans to expand the domain of his business.

Later, IBM launched personal computers, a step which provided wider scope for MS-DOS as it was the only dominant operating system in the world. Bill Gates took this chance to popularize his operating system.

At this point, he was keen on building new products under Microsoft.  He announced multi-word tool, which eventually became Microsoft Word. Bill Gates used aggressive and wide marketing strategies for Microsoft to attract customers.

In September 1985, Gates launched Microsoft Excel, which overpowered IBM’s Lotus 1-2-3. The tools introduced by Microsoft became widely popular as computer boomed across the globe. During this time, Microsoft was the only reliable software to be used in personal computers.

In 1986, Gates took Microsoft to public with an initial public offering (IPO) of $21 per share. Microsoft’s stock was worth $520 million. Gates owned 45% of the company’s share, which instantly made him a millionaire when he was just 31.

After IPO Microsoft became financially stable, allowing Gates and his team to expand the business further. With millions in his pocket he sought new avenues in software and technology. That was a remarkable step that transformed Microsoft into the most profitable technology company in the world.

Now Gates has accomplished his entrepreneurial vision as his brainchild,Microsoft, is in the forefront to create and promote the latest technology in software industry. He has adorned first place in World’s Billionaires List published by Forbes. Now with a net worth of $90 billion, Gates is the second richest person on the planet!

In a Mission to Change the World

Bill Gates has been actively involved in philanthropic activities centered around the poorest countries of the world. He co-founded Bill and Melinda Gates foundation in 2000, a philanthropic endeavor along with his wife, Melinda Gates.

It is one of the largest foundations in the world with assets worth $38 billion. The main objectives of the foundation are to enhance healthcare and to reduce extreme poverty globally.

Bill Gates also co-founded The Giving Pledge campaign along with Warren Buffett. The campaign has the wealthiest individuals in the world as signatories.

The members of the campaign will dedicate majority of their wealth for philanthropic activities. Now 183 pledgers from across 22 countries are part of the campaign.

Bill Gates has also authored books about business, entrepreneurship and technology. Some of his most popular titles are The Road Ahead and Business @ the Speed of Thought.

Dreaming big is easy. But to make dreams come true is a Herculean task. It requires a lot of energy and invincible passion.

There will be setbacks and hurdles. Don’t ponder over them and waste your time.

Get up and work harder. That’s how legendary entrepreneurs conquered the world. So it’s up to you. Decide whether you want to become the best or just mediocre! 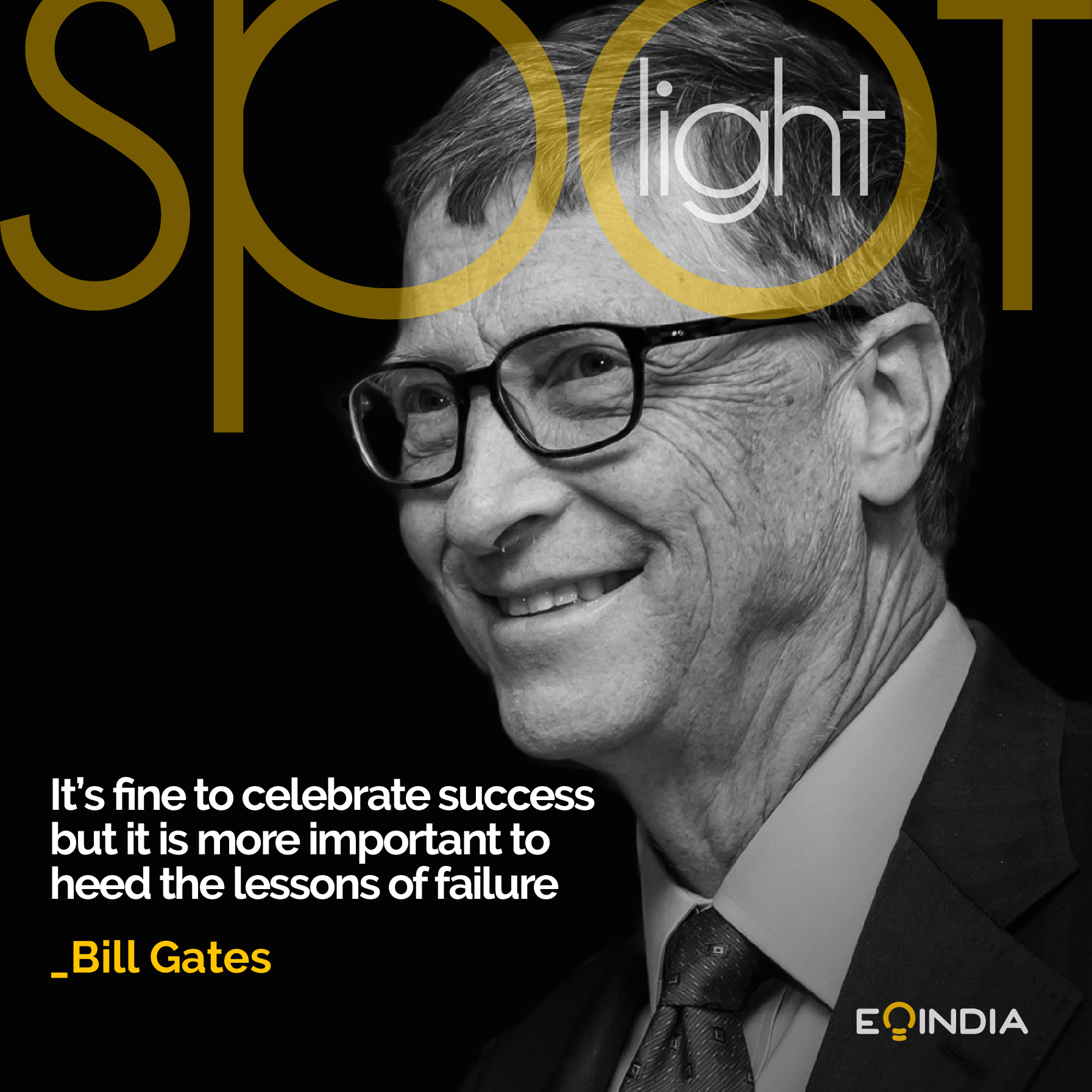 What is your favourite Bill Gates quote? Share in the comments!

“We knew we couldn’t live our lives in denial, seeing people around us suffer.”

A Studentprenuer Who is Revolutionising Fashion

“The good thing about our industry is that creativity never ceases...

Steve Jobs in India – An iNNOVATOR iNSPIRED | Entrepreneurs of...