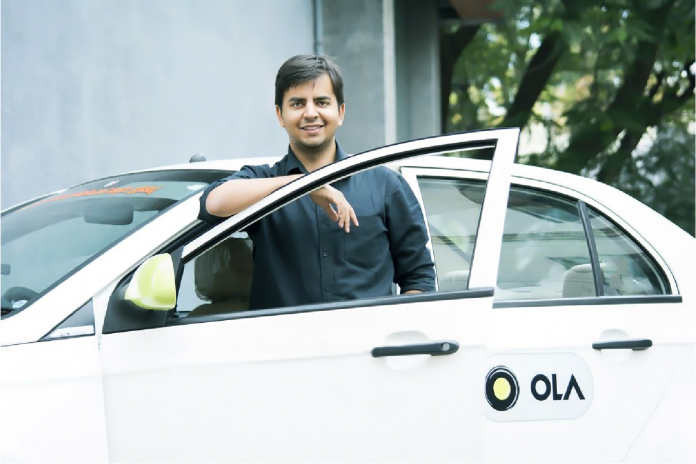 The idea for Ola Cabs hit Bhavish Aggarwal when he was on a road trip with his friends from Bengaluru to Bandipur. They had hired a car and the ride was bumpy. The driver was rogue that he pulled over the car in Mysore and demanded more money to continue the ride. Bhavish and friends were forced to get down halfway.

Later, he co-founded Ola Cabs to provide a seamless experience for passengers.  It is now one of the biggest cab-hailing companies in the world with a growing international presence. How did Bhavish drive to success, daring every roadblock?

Bhavish was born in Ludhiana, Punjab. He joined IIT Bombay after school to pursue his engineering degree in computer science. He graduated from IIT in 2008 and to got placed at Microsoft. He began his career as research intern. During his two year stint at Microsoft Bhavish acquired two patents and published three papers in some international journals.

A job at one of the largest technology companies in the world and the prospect of a huge career in future! But it didn’t give the kick to Bhavish. His parents were skeptical of his decision to quit the job to start something of his own. They were indeed surprised. Why did he put his career at stake? That too, at this early stage! They thought.

But Bhavish had already made up his mind. He co-founded Ola Cabs along with his friend Ankit Bhati in 2011. They operated in a 1BHK office in Mumbai. The office had to accommodate their drivers. So it served as a workspace for drivers during the day and office at night. Initially, they got lukewarm response.

People in India were not familiar with such online platforms. Besides, nobody was interested in their holiday trips. Bhavish understood that the real problem was travelling in the city. His experience with the rogue driver helped him understand the depth of the problem. He tried to address it through Ola. That’s how he changed the business into full-fledged online cab aggregator. Bhavish and team shifted to a new office at a basement of low profile shopping centre in Mumbai.  It was just the beginning of Ola’s superlative growth

In 2012, Ola set up rides on demand to customers who contacted them on phone. To Bhavish’s surprise, it did work. There were a decent customer base. But they weren’t enough drivers to serve them. Sometimes Bhavish would take his girlfriend’s car and pick up people who had called them for a ride. Because he was keen on giving a hassle-free experience for customers. Ola’s app was launched later.

Ola’s first booster came from Tiger Global, the American investment giant, invested $5 million in the company. To push the business further, they needed more funding. Pitching the investors was a Herculean task. Bhavish didn’t have any idea on how to bring investors on board. He wasn’t familiar with the tactics.

“I had no clue what topline and bottomline were in the context of business. I was a techie and was into coding and the business side was completely alien to me. I remember an angel investor asked me to send across our “org structure” and I had no clue. I went back and Googled it; that’s how naive I was. ,” Bhavish once said in an interview.

Taxis weren’t creating a buzz in India when Ola began. They could handle only a few rides a day. But with perpetual hard work and smart strategies, Bhavish pulled off what it seemed to be impossible for a young entrepreneur. Ola got more investors including the giants such as Silicon Valley’s Sequoia Capital and Japan’s SoftBank.

Bhavish fought against all odds to make Ola the leader in the ride-sharing segment. Under his leadership it even outperformed global giant Uber in India. Now Ola has presence in nearly 200 cities across India, Australia, UK and New Zealand. Valued at $4 billion, it is one among a few highly successful startups in India.

He is the recipient of many prestigious entrepreneurial awards and titles. He received Economic Times Entrepreneur of the Year Award In 2017.

If you have a business idea, go for it immediately. Don’t wait too long. Because you cannot take anything for granted in business. Bhavish Aggarwal could have stayed at Microsoft. But he quit the highly paid job to turn his dreams into fruition.

He faced a lot of hurdles at the beginning, but he wasn’t simply ready to give up. He figured out different ways to realise his vision. So don’t be dissuaded if your first step doesn’t work. Be patient and try another way. That’s how you chase your dreams, and the journey will always be difficult.

Who is favourite Indian entrepreneur? Let us know in the comments

Story of a Stunning Fashion Entrepreneur