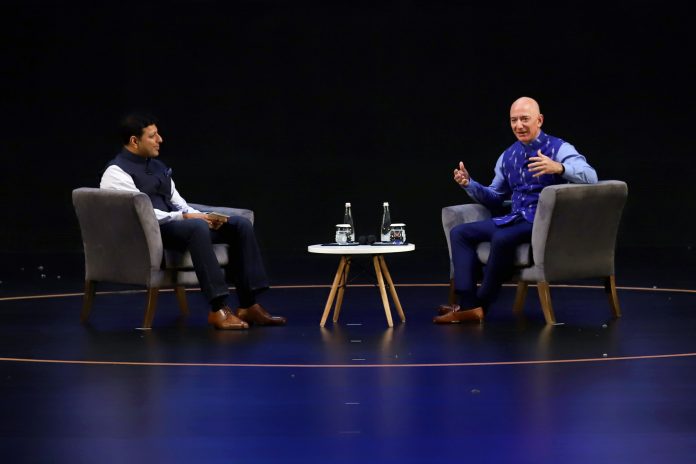 At a conference in New Delhi on Wednesday, Bezos and Amit Agarwal, the head of Amazon India, announced that the American giant is pumping $1 billion into India operations to help small and medium-sized businesses in the country come online. This is in addition to about $5.5 billion the company has previously invested in the country.

Bezos said the Amazon is also eyeing making exports of locally produced goods from India — in line with New Delhi’s Make in India program that encourages companies to manufacture locally in the nation — to be of $10 billion in size on Amazon platform by 2025.

“Over the next five years, Amazon will invest an incremental $1 billion to digitize micro and small businesses in cities, towns, and villages across India, helping them reach more customers than ever before,” said Bezos in a statement.

“This initiative will use Amazon’s global footprint to create $10 billion in India exports by 2025. Our hope is that this investment will bring millions more people into the future prosperity of India and at the same time expose the world to the ‘Make in India’ products that represent India’s rich, diverse culture,” he added.

Nearly half a billion people in India came online for the first time in the last decade. But most small businesses such as mom-and-pop stores that dot tens of thousands of cities, towns, and villages of India are still offline. Google, Facebook, and Microsoft have also launched tools in recent years to help these businesses build presence on the web and accept digital payments.

Amazon opened its conference, titled Amazon SMBhav (Hindi for possible), with videos of poor merchants and craftsmen in India who have expanded their businesses after signing up on the e-commerce platform.

An Amazon executive said the company has amassed over 500,000 sellers in India and thousands of merchants have boosted their business by beginning to sell on 12 Amazon marketplaces across the globe.

Ola Resumes Its Operations in Karnataka as Govt Lifts Ban